"The most noticeable thing, and the whole point of this review, was the fact that the glasses worked as advertised."

I’ve been gaming for a long time now. And in all my years of rescuing princesses and shooting friends online, not once did I think I would ever need eye protection. I mean sure, it was possible that I would need glasses when I got older (I currently wear a pair to combat my nearsightedness). That’s just a part of life. Protective glasses, however, were far from my mind when it came to gaming peripherals. Even after hearing about how Gunnar Optiks made computer and gaming eyewear, I shrugged it off as a product from a niche market – an accessory used by pro gamers who stared at screens way more than the average person. Well, UFG recently got a pair of Gunnar’s new Intercept Color Collection for review and it was my job to try them out. After using them for three weeks, I’ve come to the conclusion… which I’ll get to by the end of this review! 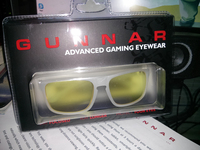 Gunnar Optiks makes ergonomically correct eyewear to reduce eyestrain and fatigue that comes from viewing digital screens. It protects the eyes from drying air currents using the shape of the lens, filters out artificial light via its amber tint, and the special engineered frames offer great stability. It even utilizes anti-reflective elements to reduce glare and can be fitted with prescription lenses. Sounds great right? But do we really need all of that to enjoy our games for extended periods of time? This was the question I was pondering after putting on my “Ghost” colored Intercept glasses. Ten minutes into my The Elder Scrolls preview all I could think of was how comfortable these glasses were!

I’ve never been fitted for Gunnar frames before. Yet they sat on my face as if they were tailor-made for me. They’re light weight but secure in staying in one spot on my face. The frame is also very durable with its multi-barrel hinges and thick plastic. Basically, it’s built to last without giving up any comfort – a fact that proved its worth after hours of use. It got to the point where I forgot they were on, and was only reminded of their presence due to the tinted lenses.

Speaking of the amber tint, it wasn’t as bad as I thought it would be. I thought it would ruin my gaming experience if I was playing anything other than a shooter. I couldn’t care less about the intricate details found in the environment when I’m chasing after a rival in Call of Duty. That isn’t the case when it comes to story based games; imagine tying to immerse oneself into an RPG while looking through a pair of shades. The game wouldn’t be as vibrant and the visuals would be darker than they actually are… or at least that’s what I thought would happen. In actuality, the amber tint is very light. It does change the tone of what you’re looking at and I wouldn’t recommend them to artists that need to see “true” color saturation. That said, I was able to appreciate ESO’s lush habitats and The Wolf Among Us’s bright colors while wearing the Intercept glasses.

The most noticeable thing, and the whole point of this review, was the fact that the glasses worked as advertised. It took a while to really tell the difference, but after a week or so I noticed significantly less eye strain. Being a journalist, I spend a lot of time in front of a PC. Whether I’m writing something like this or playing a game for review, most of my day is spent staring at a monitor. And while I don’t always experience the fatigue that’s associated with this sort of work, there are times when I’m forced to take a break. On rare occasions, I’ll even get a migraine. None of these symptoms were present while wearing the Intercept glasses. It was true; they do help in allowing longer periods of play/work when in front of a digital screen!

If you couldn’t tell, I really enjoyed wearing my Ghosts (I named them after the color). They were comfortable, helped to reduce eye strain, and didn’t ruin my gaming with a harsh tint. My only complaint really had to do with the style. While they didn’t make me look goofy, they were big enough to warrant some awkward glances. Especially if you wear them outside; I was serious when I said that I’d forget I had them on. They aren’t as sleek looking as some of the other Gunnar eyewear, though the new colors do add some personal flavor. The other thing I wanted to bring up was for some reason the glasses would bother me if I wasn’t looking at a bright screen. It could have just been a “me” thing but keeping the glasses on when not in front of a monitor/TV/digital screen hurt my eyes after a while. I had to stay at my desk when using them – odd I know. These are minor things when compared to how good of a job the Intercept does though.

As far as needing Gunnar eyewear, it really comes down to personal preference. While I do believe they are worth the price ($60), they aren’t for everyone. Even though they help with eye strain it isn’t healthy to live in front of a computer – you really should take long breaks from your monitor from time to time. Still, if you do decide to try out Gunnar’s Intercept line I’m pretty sure you won’t be displeased!